Here at Nerdlithic, we are torn between Cookies and Cinnamon Rolls. Specifically, which decadent, pleasure bomb would win in a fight. To the death.

This has come to be known as The Great Cookie-Roll War. It’s just as insidious1 as it sounds. 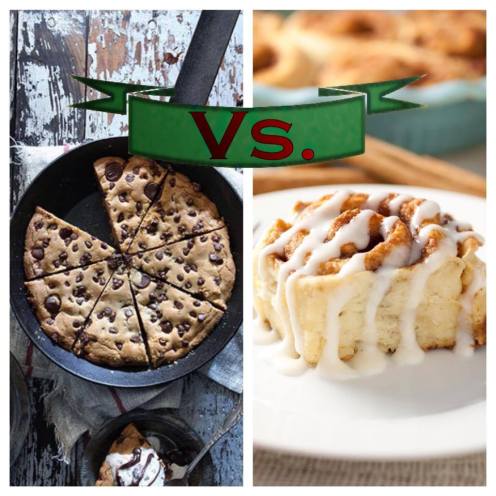 Cinnamon Roll: Usually, comes in a bit bigger. A little rarer to find, and not a lot of variety when it is found. Points: (8/10)

Cookie: Simple. Classic. Common. You have countless varieties, and that makes it special. Points: (3/10)

No one cares. We ain’t about that life. Neither will help that six pack though; that’s for sure.

Cookie: Sugar. Anything. Comfort, with a hint of child-like wonder. Points: (7/10)

Cinnamon Roll: Packs a punch. Even a smallish cinnamon roll is going to out-mass a largish cookie. The roll takes a beating without sacrificing its integrity and taste. Finally, the roll boasts the super effective “harden” ability allowing it to transform from delicious treat to sugary building material. Points: (4/10)

Cookie: It might be weaker and usually a bit on the crumbly side, but this is made up for with numbers and hardened edges and extreme versatility. There’s a reason “One tough cookie” has made it so far in our language. A cookie that’s been out of the oven for a bit may as well be a knife. Why do you think cookies have been banned from all prisons?  Points: (9/10)

Tinkerer- Well, in my opinion, nothing beats the gooey filling of a cinnamon roll. The simple combination of cinnamon, sugar, and butter magically change into something totally indescribable by words, but rather can only be experienced by the tongue. #TeamCinnamon

Schemer- Team Cookie for life! There’s nothing like a plateful of warm, chocolate chip cookies heaped to high heaven. Seriously, what else can you actually eat a dozen of and be in such a comfortably happy zone. A dozen cinnamon rolls or donuts? You’re wishing you’d never been born. A dozen oreos, or M&M’s? Child’s play that will only leave you wanting more. But a dozen cookies, that’s the sweet spot. Plus, cinnamon rolls don’t have chocolate. If one’s to eat sugar, it better have some chocolate up in there. And you can’t hold a cinnamon roll while you game. Cookies are finger food. Cinnamon rolls aren’t.

Wiseman- The cinnamon roll… A dessert so good that it was named a breakfast food simply because no one could wait until after dinner to eat one. The cookie… Often called the girl next door of baked goods. So sweet. So innocent. So unassuming. Which one wins out in the battle to control our heart and cause our heart attacks? When faced with such a quandary, I must turn to the wisdom of the streets and a giant blue monster inhabiting them. C is for cookie and that’s good enough for me.

We are looking to you guys to determine the outcome of The Cookie-Roll War.

Come see us this Saturday if you’re in the Amarillo area. We will shower you with sugary foods and make you cast a vote.

Need directions? Contact us and we will shower you with information, and then sugary foods.

Drop us a line: theguys@nerdlithic.com

A schemer, a tinkerer, and a wiseman wander into a website....
My Tweets